Summer is here, so the Slug Lab is running full speed.

We’re lucky to be joined once again by a really talented and dedicated team of students.  Here’s most of us at a pizza party to inaugurate a summer of research. 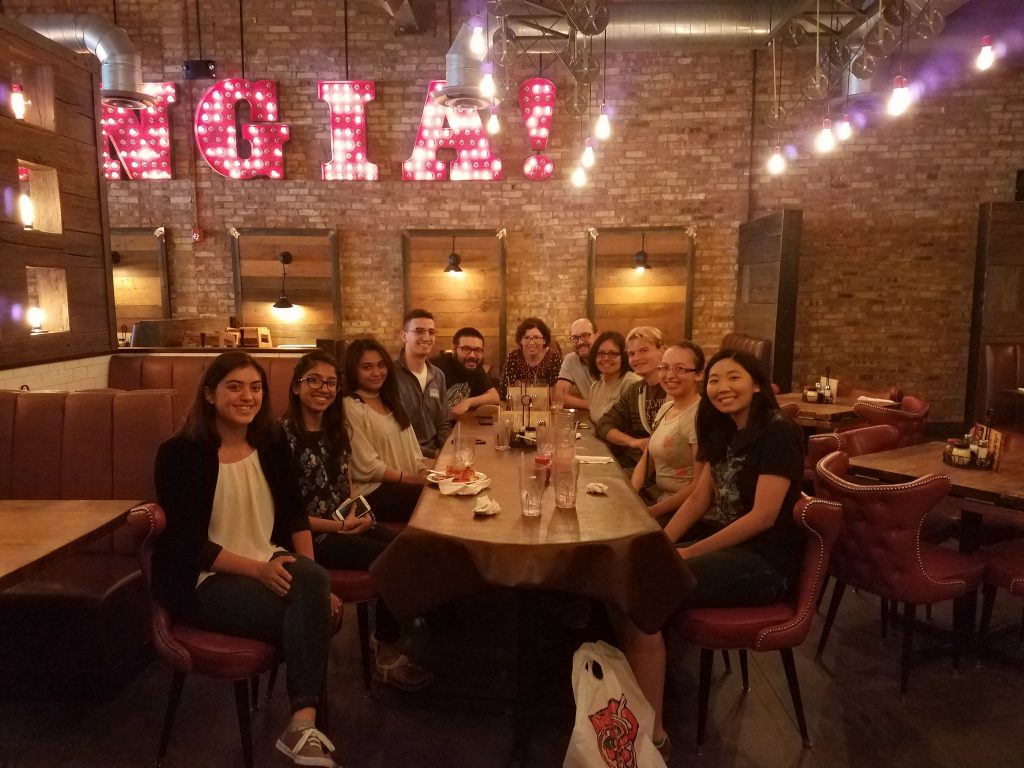 From far left we have

And not yet in the photo but planning on joining when she returns from Ireland: Shannon Wilcox

I hope I don’t jinx anything when I say that we’re off to a great start, with a very successful round of behavioral experiments and RNA isolations.  Looking forward to another great slug lab summer.

Most long-term memories are ‘forgotten’–meaning that it becomes harder and harder to recall the memory.  Psychologists have long known, though, that forgetting is complex, and that fragments of a memory can remain.  For example, even after a memory seems forgotten it can be easier to re-learn the same material, something called ‘savin 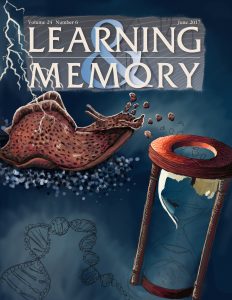 gs memory’.  That suggests that there is at least some fragment of a memory that persists in the brain even after it seems forgotten…but what?

Today our lab has published a paper shedding a bit of light on this long-standing mystery (Perez, Patel, Rivota, Calin-Jageman, & Calin-Jageman, 2017).  We tracked a sensitization memory in our beloved sea slugs.  As expected, memories faded–within a week animals had no recall of the prior sensitization.  Even more exciting, we found similar fragments of memory at the molecular level–there was a small set of genes very strongly regulated by the original training even though recall had fully decayed.

Why?  Do these persistent transcriptional changes help keep a remnant of the memory going?  Or are they actually doing the work of fully erasing the memory?  Or do they serve some other function entirely (or no function at all)?  These are some of the exciting questions we now get to investigate.  But for now, we have these fascinating foothold into exploring what, exactly, forgetting is all about in the brain.

As usual, we are enormously proud of the undergraduate students who helped make this research possible: Leticia Perez, Ushma Patel, and Marissa Rivota. Ushma, who wants to do science illustration, is making an incredible piece of artwork representing these findings.  A draft is shown above.  She submitted it for the cover of the journal, but sadly they journal selected a different image (boo!).  Still, a very exciting and proud day for the slug lab!

Wow! Our lab just returned from the 2017 Society for Neuroscience meeting.  It was the typical maelstrom of neuroscience–with more than 20,000 neuroscientists bustling about trying to share the latest and greatest about their research.

This turned out to be an especially great year for the Slug Lab.  Leticia Perez, who has been working in our lab for the past two summers, submitted an abstract to present the work she and others in the lab have been doing on forgetting.  We’ve been really excited about the results of this project.  It turns out the SFN organizers were excited, too–they selected Leticia’s abstract for a 10 minute talk during a mini-symposium on the mechanisms of learning and memory.

Leticia absolutely crushed it–she gave a concise, clear, and exciting presentation on what happens in the Aplysia nervous system as a long-term memory is forgotten.  She handled the questions wonderfully, and was soundly congratulated by many researchers in the learning and memory community.  Of the 20,000+ in attendance, I’m willing to be she was the only undergraduate to give a talk at this year’s meeting.  It was *such* an accomplishment.

In case that wasn’t enough, Leticia also brought along a poster presenting the research.  She gave the poster at the pre-meeting on molecular and cellular neuroscience and at the undergraduate poster session.  Yes, that means she gave 3 presentations last weekend!  Wow!  And, again, all went wonderfully.

Part of the reason Leticia was able to attend the meeting to earn all this acclaim is that she was awarded an Excel scholarship through Dominican University–this paid her registration, hotel, and airfare to make it affordable to attend the meeting.  She still had to work like crazy to collect the data, refine the presentation, and clear her class schedule to attend.  Lab alumnnus Marissa Rivota also attended–so her and Leticia also got to see the capital and the White house.

We’re so proud of Leticia, and of the many other students who have worked so hard in the lab for the past summers to make this forgetting project such a success.  There will be a paper on it coming out very soon in Learning and Memory.  It’s tremendous work to do good science–we’re so happy to have wonderful students who want to get involved and excel.

Below are photos of Leticia giving her talk, giving her poster, and celebrating with me, Irina, and Marissa.  Congrats, Leticia! 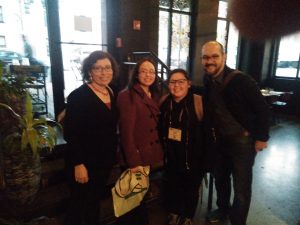 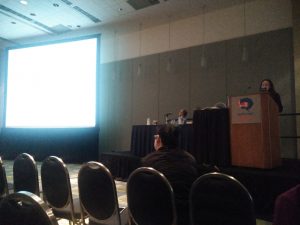 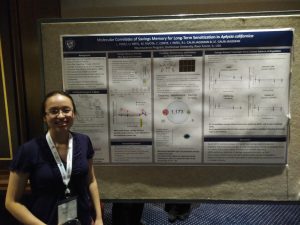 At this year’s Society for Neuroscience meeting, Irina and I were honored for our contributions to the Faculty for Undergraduate Neuroscience (FUN).  Specifically, we were both given the annual Distinguished Service Award.  The honors were bestowed for our work organizing the FUN conference this past summer and for other work supporting the mission of undergraduate neuroscience education.

We’re so fortunate to be a part of FUN–it’s our favorite people all working towards a mission that is so very important.  Thanks for the great honor, and we’re looking forward to staying very involved with FUN.

Here’s a photo of Irina’s award. 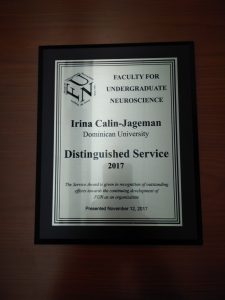 This summer I (Bob) was asked to write a series of perspective pieces on statistical issues for the Journal of Undergraduate Neuroscience.

My first effort has just been published–it is a call for neuroscience education to shift away from p values, and an explanation of the basic principles of the New Statistics with an example drawn from neuroscience.

It turns out that the paper was published just before the annual meeting of the Society for Neuroscience, which I am currently attending.  It’s been very gratifying to see the paper is already sparking some discussion.

Here’s the key figure from the paper comparing/contrasting the NHST approach with the New Statistics approach with data from a paper in Nature Neuroscience. 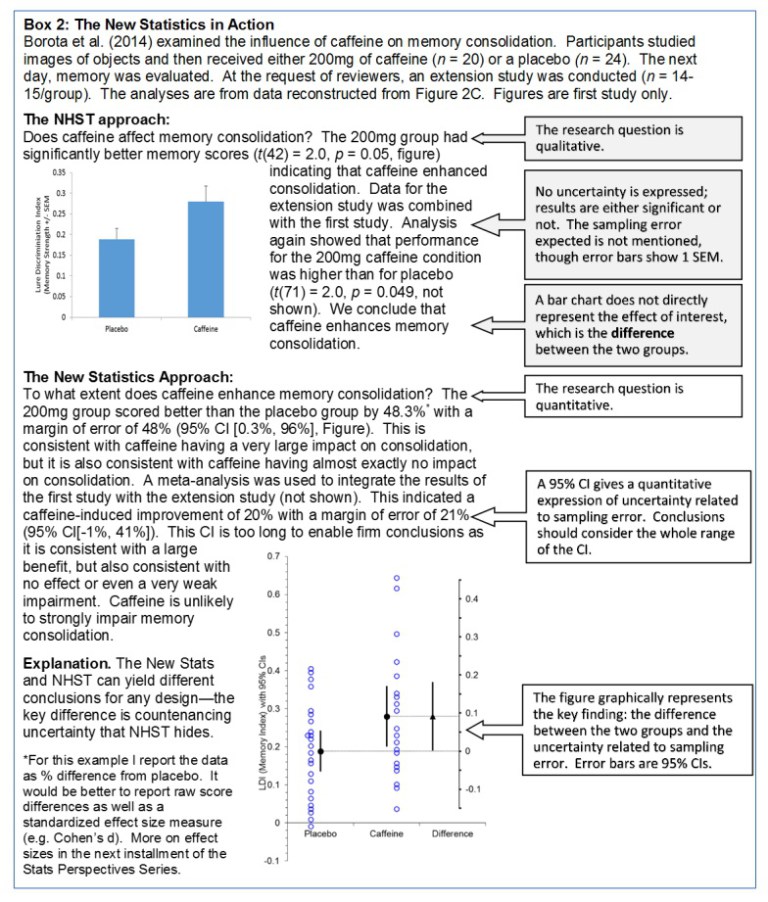 This fall I (Bob) was invited to give a talk at Indiana University as part of a series on good science and statistical practice organized by the university’s Social Science Research Commons (which is like a core facility for getting advice on statistics and experimental design…what a cool thing for a university to have!).

I really enjoyed my visit (thanks Emily, Cami, and Patricia)–good conversation with fascinating people in a beautiful setting.  The series has a video archive, so my talk is now posted online as a video and as a powerpoint. Here’s the link–take a look if you want to know more about how to get started using Open Science practices and the New Statistics:  https://media.dlib.indiana.edu/media_objects/gt54kp23k

Under the right circumstances, a memory can last a lifetime.  Yet at the molecular level the brain is constantly in flux: the typical protein has a half-life of only a few hours to days; for mRNA a half-life of 2 days is considered extraordinarily long.   If the important biological molecules in the brain are constantly undergoing decay and renewal, how can memories persist?

The Slug Lab has a bit of new light to shed on this issue today.  We’ve just published the next in our series of studies elucidating the transcriptional changes that accompany long-term memory for sensitization in Aplysia.  In a previous paper, we looked at transcription 1 hour after a memory was induced, a point at which the nervous system is first encoding the memory.  We found that there is rapid up-regulation of about 80 transcripts, many of which function as transcription factors (Herdegen, Holmes, Cyriac, Calin-Jageman, & Calin-Jageman, 2014).

For the latest paper (Conte et al., 2017), we examined changes 1 day after training, a point when the memory is now being maintained (and will last for another 5 days or so).  What we found is pretty amazing.  We found that the transcriptional response during maintenance is very complex, involving up-regulation of >700 transcripts and down-regulation of <400 transcripts.  Given that there are currently 21,000 gene models in the draft of the Aplysia genome, this means more than 5% of all genes are affected (probably more due to the likelihood of some false negatives and the fact that our microarray doesn’t cover the entire Aplysia genome).   That’s a lot of upheaval… what exactly is changing?  It was daunting to make sense of such a long list of transcripts, but we noticed some very clear patterns.  First, there is regulation influencing growth: an overall up-regulation of transcripts related to producing, packaging, and transporting proteins and a down-regulation of transcripts related to catabolism.  Second, we observed lots of changes which could be related to meta-plasticity.  Specifically, we observed down regulation in isoforms of PKA, in some serotonin receptors, and in a phosphodiesterase.  All of these changes might be expected to limit the ability to induce sensitization, which would be consistent with the BCM rule (once synapses are facilitated, raise the threshold for further facilitation).  (Bienenstock, Cooper, & Munro, 1982).

One of the very intriguing findings to come out of this study is that the transcriptional changes occuring during encoding are very distinct from those occuring during maintenance.  We found only about 20 transcripts regulated during both time points.  We think those transcripts might be especially important, as they could play a key regulatory/organizing role that spans from induction through maintenance.  One of these transcripts encoded a peptide transmitter called FMRF-amide.  This is an inhibitory transmitter, which raises the possibility that as the memory is encoded, inhibitory processes are simultaneously working to limit or even erode the expression of the memory (a form of active forgetting).

There are lots of exciting pathways for us to explore from this intriguing data set.  We feel confident heading down these paths because a) we used a reasonable sample size for the microarray, and b) we found incredibly strong convergent validity in an independent set of samples using qPCR.

I (Bob) have a new replication paper out today, a collaboration with DU student Elle Lehmann (Lehmann & Calin-Jageman, 2017).  The OSF page for the paper with all the materials and data is here: https://osf.io/j3fyq/ (Calin-Jageman & Lehmann, 2015).

The paper replicates a set of previous findings showing that the color red dramatically increases romantic attraction for both women rating men (A. J. Elliot et al., 2010) and men rating women (A. Elliot & Niesta, 2008).  Elle and I conducted two replications: one in-person with a standard psychology participant pool, the other online with MTurk participants.  In each case we planned for an informative sample, used original materials, pre-registered our design and analysis plan, and used extensive exclusion criteria to ensure suitable participants (e.g. testing for color-blindness).  In both cases, we are sad to report that there was little-to-no effect of red on perceived attractiveness or desired sexual behavior.

There were a few weaknesses: 1) for the in-person study we didn’t obtain nearly enough men to make a good test of the hypothesis, 2) for the online study we couldn’t control the exact parameters for the color red.  Still, we found no strong evidence that incidental red influences perceived attractiveness.

Beyond the (disappointing) replication results, there are some really interesting developments to this story:

This summer DU’s photographer stopped by the lab to take some snazzy photos of the Slug Lab in action.  Here’s one of the photos, featuring the amazing roster of talented students who devoted so much time and effort to the lab this summer.  Back row (left to right) is Steve Farrell, me (Bob), and Derek Steck.  Front row is Marissa Rivota, Ushma Patel, Leticia Perez, and Irina.  Also, check out the cool slug lab logo that Ushma designed! 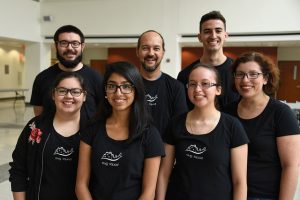 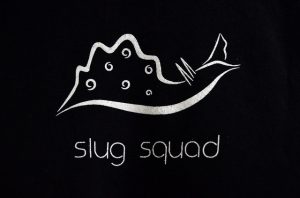 This year I was elected by the DU faculty to give the commencement address during our undergraduate commencement. I took it as an opportunity to talk about frontal-lobe function in dogs… it turned out much better than that might sound.